One of my major writing inspirations died this week. :_( 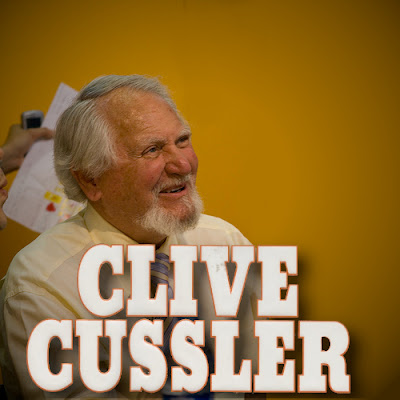 Multiple bestselling action/adventure author Clive Cussler died on Monday in his Arizona home. The facts surrounding that can be easily found on your mainsleaze news media of choice or wikipedia, but I wanted to chime into the conversation with my take on his work and how it has influenced my own.

First, if you're not familiar with his work, his books are very action-packed and have often been described as "a cross between James Bond and Indiana Jones". That is, he is always out to save the world from megalomaniac baddies like Bond, but on the other hand, there is always a historical mystery element to piece together like Indy. (Sound familiar to anybody we know?)

That was the fiction he wrote, but what the casual reader might not know this: Cussler didn't only write about uncovering history, but actually did so, himself! He was an antique automobile collector and underwater explorer who went on several amazing adventures. (His autobiography is one of my favorites.)

He even founded his own exploration group named NUMA, after the fictional (albeit better funded) one from his stories.

One thing that will always stick with me is how he talks about a little speech he had with his crew.

My rendition:
So he had hired a large oceangoing vessel and crew and was supposed to meet up with them. The water was choppy that day as he approached the exploration vessel in his little motorboat. With the rolling waves and rope ladder he had a hard time getting aboard.

Rather than lend a hand, the rough sailors only laughed at his attempts to climb up.

Livid, he gathered the entire crew together for a meeting.

Sure enough one of the sailors bit. "And why the [explicitve] would we save that hand?"

He looked them in the eye and said, "Because that's the hand that writes the checks!"
After that they took a lot better care of him. :)

And speaking of an author living his adventure...

As for me I finally decided to become an author when I was commuting back and forth into the city every day (an hour each direction on a good day).

Needless to say, I had a lot of time to kill. Evenings were no problem as I had Brant Hanson to listen to on the radio -- my favorite DJ of all time, hands down. But in the mornings I needed something to occupy my mind other than talk radio (which had a way of wrecking my attitude).

Inevitably, being an avid reader, I finally turned to books on tape. Round-about way of saying, I wound up listening to most of Clive Cussler's repitore while staring at the taillights of the car in front of me.

While going through the books I often thought, "Wow! My boys would love these!" But then there was always that "one scene"... you know, where Dirk Pitt winds up sleeping with a married woman in a Titanic stateroom or somesuch other horrible thing.

Then, in stepped a Christian filmmaker colleague who posted a meme, "Create the things you wish existed."

That was it. Over the next several months I sat in the "hot box" (my car in the parking lot at lunch times) banging away on what would become my first release, "Queen of Atlantis".

In short: all the adventure with none of the cringe.

Even though I went an all new direction with the stories, there were three characters in the series which were based around Cussler's world, as a silent omage to the books' inspiration.

Two of these were Michael and Melinda Moast, themselves. They were based in part on Sam and Remi Fargo from one of Cussler's serieses.

I liked the idea of a married couple who "do adventure" together. It completely dovetails into the Christian view of marriage. What's more, I think that living through the ups-and-downs of the adventure of life together is really what a healthy marriage is all about.

We lost a very talented author and dynamic personality, without whom, most likely, my own works would not even exist.  Mr Cussler, we salute you!