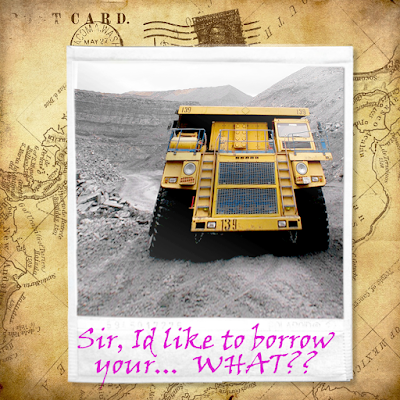 Upon returning to the scene of yesterday's fiasco, the adventurers stood in awe of the monstrosity of death looming before them.

Each became literally dumbstruck in the light of the impossible immensity of their foe.

Wendell was the only one with the power of speech.  (Which certainly didn't help matters.)

"Don't worry compadres, it's always darkest just before the dawn."

Jack placed a restraining hand on her to halt the imminent pummeling, "Yeah, bro, we'll need more than mixed-metaphors to get out of this one.  Start thinking."

He scratched his chin for a moment and then snapped his fingers.  "Of course!  That mining operation we passed.  They must have dynamite or something."

An allowing expression came across Misty's face.  "Say, that's not half bad.  You know, that's the first non-insane thing you've said all morning."

A crazed grin spread across his face.  "Wait till you see me with dynamite!"


A few minutes later they lie at the cusp of a ridge, with Jack inspecting the mining operation far below through a pair of binoculars.

"What do you think?" asked Misty.

"I don't see anybody around."  He swept the scene once more to be sure as he said it.  "Looks totally abandoned to me."

Misty nodded.  "I guess that's not too surprising.  Most of the workers probably lived in that wrecked village."

"Anything that looks like explosives storage?" asked Lola, then surmised, "I think it would be far away from everything, with big red signs all over it."

He passed Wendell the binoculars.  And for good measure he tossed the strap around his neck, Wendell being, after all... Wendell.

Misty admitted, "I don't know much about mining, but maybe with the way they're going about it they don't need to blast?"

"You did not!" she snapped back.

Lola interrupted the ongoing bickering, "Come on guys.  There has to be something down there you can use."

"Nothing interesting down there but one little dumptruck." said Wendell.

Lola added, "That's in Russian, dear.  'Belaz', is the name of the manufacturer."

"No!"  Jack grabbed the binoculars back away from him.

Wendell lay half-strangled by the strap, continually kicking and slapping his arm.

"It is!  That 'little dumptruck' of yours is one of the biggest machines ever made!"  He handed the binoculars back to Wendell, much to the other boy's relief.

"Not fast though."  said Irmingard, "That beast will only go about 60 kilometers an hour."

Jack looked at her.

Without taking his eyes off the scene below, Wendell brought a folded map out of his back pocket and passed it over.

Lola unfolded the map on the ground.  It wasn't ideal.  It had come from the glove box of the army truck and wasn't written in English.

"That must mean they're going that way."  Misty pointed, then scratched her chin.

A chill ran up Jack's spine.  "Towards former Yougoslavia."

"Kosovo... Serbia... Montenegro... those guys all hate eachother!"  He clapped Wendell on the shoulder.  "Hence the word, 'former'.  There's a reason the country broke up, dude."

"They mean to start a war."  said Misty in awe.

Lola caught her sister's eye and they both nodded.

Jack pointed.  "And look here.  There's another town right in their path."

"We've got to get ahead of the war machine and warn 'em!"  declared Misty, and they all knew it was so.

"Okay, you Brits go 'borrow' that dump truck.  The rest of us will take the troop transport into town and evacuate the place.  We'll meet up just outside of the town.  I don't know if we can make a dent, but we can at least give those cannons something else to shoot at.  -- Hopefully give people a chance to escape."

His objection fell on deaf ears as they all broke huddle and moved off to intercept the mighty Juggernaught.  -- A desperate course of action which, to all observers, could very well spell their doom!