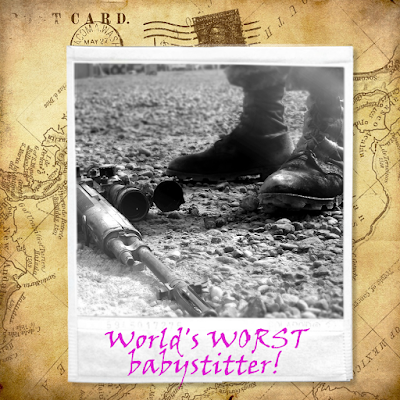 The three teens ran down the main street of town banging on doors and shouting for people to get out.

It didn't take long before they had quite a confused crowd gathering in the road, including two or three local police officers.

Spying them, Wendell said aside to his friends, "What country do you think we're in, anyway?  Bulgaria?  Any of you guys speak Bulgarian?"

"If not, we're close enough they probably understand it." added Jack.

"I got a little."  said Misty and then turned to the crowd.

She spun on him.  Her finger shot out in the direction of the coming threat.  "I don't even know what to call that thing in English!"

" 'En'?" Misty said aloud, surprised to hear the idol's name and not knowing enough of the other words to decipher what it might mean.

A woman and her pretty young daughter rushed past with old, worn, hard-shell suitcases bumping along behind.  "Wait!" cried the younger one.  She was about the same age as the Americans, perhaps only a year or two younger, and spoke English very well.

She looked up at Jack in awe.  "Are you the one whose coming the prophecy foretold?"

Jack tried to speak, but Wendell stepped in front of him.  "Why, yes", he said with a sly voice, "Yes I am."

There was a long silence.

"Wait.  This is a good prophecy, right?" he asked the older woman.

He only got a confused look in return.

"Not the other kind.

"Help me out here, Ma'am, does this involve locusts... in any way?"

Jack shoved him away.  "Pay no attention to him.  We're just visitors, but we've got a plan!"

"Do we?" said Misty out of the side of her mouth so she wouldn't be noticed.

Just at that moment their conversation was brought to a screeching halt by an explosion and a geyser of dirt.

"To... the dump truck!"  Wendell shouted with much more zeal than the statement normally deserved.  It even caused him to hesitate a moment, but then he shook his head and ran off behind the others.

Just as they rounded a stand of aspens, a sudden crack and shower of splinters brought Jack up short.  The other two ran into him from behind.

They all dove for cover, mostly in the direction that the fall was already taking them.

The heavy-set sniper stepped out from her concealment behind a boulder, nestling a high-caliber hunting rifle in her chubby arms.

"Surin' I'm sorry about that Jack.  Ye, kinda startled me there."

"M-McCready?" he stumbled to nobody.  Then, once he'd heard the name and judged it to be true, he said to the others, "Hey team!  It's Ms McCready!"

The teens untangled themselves and made their way back to their feet, spitting and dusting off detritus and pine needles as they went.  Misty had a stinging new abrasion on her elbows, but other than that they were mostly unharmed from nearly having their heads blown off by friendly fire.

Wendell glanced nervously in the direction of the dump truck and the mobile battle fortress that was drawing ever closer.

"What are you doing here, anyway?"  Jack asked.

Ms McCready shifted her weight and said, "Ah, there's some bad shenanigans goin' on in this part o' the world and Michael and them sent me t' keep an eye on you guys.  Make sure you didn't do anythin' stupid or whatnot."

Wendell snapped his fingers and pointed.  "Hate to cut you off here Miz M, but me and the guys need to cheese it so we can chase down a gigantic armored war machine with a stolen dump truck."

The three started to run off, but she held her hand out, blocking their way.  "Woa, woa, woa woa!"

"What?  You mean you're going to stop us over that?"

A mischevious smile spread across her face.  "Course not, but m' Jeep's faster.  Plus I brought extra weapons."

The bounding off-road drive to the dumptruck gave the team time to gear up on firearms and explosives, as well as to reflect on the deeper issue: whether making Ms McCready a chaperone was such a good idea on Michael's part.