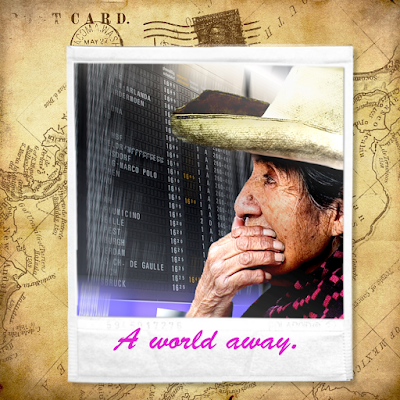 Another woman struck up a conversation with Niñera.

Despite grandmother's rural, careworn appearance and the woman's clean and modern outfit, she was either bored enough or intrigued enough by her appearance to break the silence.

"I'm visiting my kids." she offered.  "They live with their father in Los Angeles, and I don't get to see them much.  How about you?"

"I am searching for a man.  I have a message God told me to give him.  Have you ever had a prophetic vision from God?"

"Um.  God and I aren't exactly on speaking terms."

Niñera was confused.  "Why ever not?"

The woman scowled.  She objected to the word on a deep level.  To have some old lady just throw it up like that came across as supremely offensive.  Yet...

The other didn't seem to be judgmental or anything like that.  In fact, her face seemed just as soft and kind as before.

She shrugged.  "Yeah.  I guess you could say that."

"Then I will pray that He would draw you close by His great mercy and then give you the power to overcome this stronghold Satan has over your life."

The woman's mouth opened and closed several times as if she was trying to say something but couldn't decide on what that should be.  "Thank you." she finally said.

At that moment the intercom came to life.  "Hello, this is your captain speaking.  I regret to inform you, we are experiencing mechanical problems and your flight will experience a lay-over."

Antonio didn't understand the word, but gleaned that it must be a bad thing by that fact that everybody aboard groaned in unison.

'Lay-over'? he thought, What would be so bad to lay-over?

He determined that whatever people were being asked to lay over it must be something very uncomfortable. He also decided that, unlike the other passengers, he was glad he'd remembered to bring his bed roll.