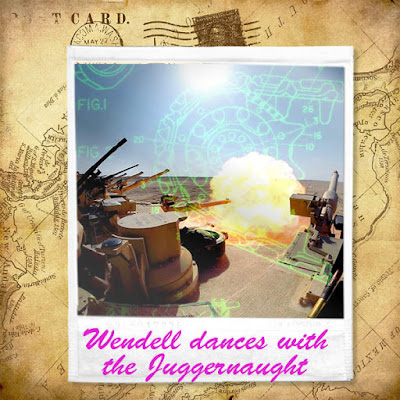 Jack nodded.  "Yeah. And dollars to doughnuts that Seebeck character must be involved.  I'm starting to really regret letting that weasal go."

"Yeah, but you said yourself, trying to take a kicking, screaming captive with us would only bog us down."

"Yeah, she's right." added Wendell.  "Now we've got a shot of catching up to this thin while the trail's still fresh."

All eyes turned to him, but no one spoke.  Only gawked.

"What?"  he whined impatiently.

"You really intend to follow that thing?"  Irmingard said.  She had been hanging sweetly onto his arm up until now.

Wendell's eyes darted back and forth among his friends, still silently looking at him like a man from outer space.

Everybody gave some form of groan and/or face-palm.  All except Misty, who it struck as hilarious.

When she recovered herself enough to speak, "Okay, sorry.  But he's got a point, you know.  What are we gonna do?  Go home?  I don't think so."

"Come on, guys, this is exactly the kind of action we were Jealous over Kurt and his boys getting." She stabbed the air with two fingers in the direction of Lola and Irmingard.  "And since I met you girls, I've never seen you back down from a fight, either."

They smiled and nodded.  They seemed flattered at the allegation.

"Woa, woa, woa."  Jack waved his hands in the air.  "Am I really the only one that thinks that a handfull of teenagers going up against a village-destroying mechanical monster is a bad idea."

"Yeah!"  said everyone in the circle.

Upon tracking and locating their target, the team decided to make way on their stomach the last few yards so as to maintain cover in the low foliage.

They barely had a chance to get a glimpse of the towering wall of metal and machinery, before they witnessed its many gun turrets swing in their direction.

Nobody needed to be told.  They were all making for the cover of a boulder at the top of a nearby ridge.

They hit the dirt and returned fire, using the weapons pilfered from Seebeck's tower.  They now seemed woefully small and inadequate, and ammo was already low from their earlier escapades.

"Any ideas, folks, would be great." said Misty, not looking up as she popped off another round.

"Okay, we can beat this.  What've they got that we haven't got?"  asked Jack.

Wendell shrugged.  "Robotic cannons that can blast the hat off a housefly at 100 yards.  How can you beat a robot brain with lightning reflexes?"

Jack seemed to be considering something so she turned to Irmingard.

"He may be right.  No other way of explaining the perfect accuracy and synchronization."

"Ever hear about Garry Kasparov vs Deep Blue?"

Misty recalled, "Yeah, yeah.  The Man vs. The Machine.  They made us watch it in school.  Never seemed to have any practical value.   (Besides scaring people, that is.)"

"Well, here's some practical value for you:  Some chalked Kasperov's victories up to his human ability to behave unpredictably at times - something a computer can't process."

Wendell was clueless.  " 'Behave unpredictably'?  What good does tha--  Hey. Why's everybody looking at me?"

"Get out there Wendell." said Misty with a jerk of her head in the direction.

"Scream, run around, tell lame knock-knock jokes... whatever you do.  You've got to confuse the computer with your random nonsense while we knock out that gun."

"Think of it this way:" said Jack.  "You only just finished saying how 'insane' is the last thing they'd expect."

Everybody nodded.  "You said that.  You did."  Irmingard pointed out.

Wendell felt inclined to take that as an insult until Misty said, "Yeah.  It's kind of like... your superpower."

At that, Wendell stood and sucked in a lungfull of air.  He stuck out his chest like those superhero comics of which he was so fond.

The latter turned around and shouted, "And my knock-knock jokes ARE NOT lame!"

Misty shrugged.  She whispered aside to Jack, "I hope he doesn't get deaded out there.  Then I'll feel bad."

A row of geysers erupted in the dirt as a machine gun tracked toward him.

"Eep!", he shouted and bolted in the opposite direction.

He took on a crazily winding, zig-zagging course through the deadly shooting gallery.  Despite the amount of lead flying, he seemed to be able to keep one step ahead of the artificial intelligence.

For all his antics, he wasn't able to approach.  However, the distraction did give the others a chance to size up their foe for the first time.

"What'dy think?" asked Jack to the others.

Misty said, "Looks like one of those huge tracked thingys that NASA uses to bring spaceships out to the launch pad."

"Yeah, but everything's high up on legs like a deep sea oil platform.  No way we'll be able to get up to the good stuff from the ground."

"We could disable the tracks."  Lola pointed out.

"Not with those guns.  Look."  Jack drew some imaginary lines in the air as he said, "They're machine controlled, so they can swivel a full 180 in their sockets.  They'd be able to shoot straight down on us."

"What's worse," Jack continued, "I'd venture to guess that whole platform is a couple of floors of barracks for those zombie soldiers.  No telling how many are in there, and how many back at the tower were reserves."

Misty added, "Up on top, where we can't see... probably the whole roof is covered with choppers to bring 'em places."

"So you think our being here is all a wash, then?" asked Irmingard.

"Say.  How's he doing out there?" she added, gesturing beyond the rock with her head.

Misty and Jack popped their heads out of cover once again.

"Good job, Wendell!"  Jack called out, trying to encourage his friend to keep it up.

"Whadya mean?"  Wendell shouted back, "It didn't even like my cactus joke!"

He jumped like a startled hare at the next gunshot and ran off in some crazy direction.

Jack rolled his eyes and muttered, "The cactus joke."

"Surprised it didn't shoot him for that alone." said Misty.

After a silence, offering, "I could shoot him."

"Maybe later.  Might as well call him back though."  Jack sighed and reluctantly added. "Let's get outta here."


The preceding has been a chapter from Juggernaught: A Moast Unusual Bible Study
(Copyright 2016, Edmund Lloyd Fletcher.)