Journal: Not Dead Yet (plus sneak peeks!)

Since this blog has been badly neglected, I thought I owed you all an update on what's going on.

At the end of November I "temporarily" put off the Juggernaught story to finish up NaNoWriMo story.  Naturally, that "temporary" extended through the holidays.

And then in January I decided to push myself to do ANOTHER NaNoWriMo.  Yep, that's right, I completed an entire rough draft of another installment of the Moast Unusual series!


True to form, it has everything:  Ancient riddles, car chases, mayhem, lazers, and Wendell being... Wendellish.


Almost as an afterthought, [Jack] added, "I hope it isn't a big deal all the traffic accidents we caused."

The Prime minister smiled warmly. "No, no, dear boy. Parliament will understand."

"Yeah, and that mailbox we exploded." Wendell added.

"M-mailbox?" asked the Prime Minister. A look of concern washed over her face.

Her eyes drifted to Jane.

Jane shrugged and shook her head, pointing at the bandage. The news came as just as surprising to her.

Jack whispered to Wendell, "I think they call them 'pillar boxes' over here."

"Oh. Right." he said back, and amended his statement to the Prime Minister, "Sorry we exploded one of your pillar boxes. It seemed like such a good idea at the time."

He hung his head in shame. "Now, in hindsight, it just seems violent and dumb."

The story came together so well that I decided to insert it in between Queen of Atlantis and the planned book 2 (which is long enough, but has plot holes big enough to drive, say, a Juggernaught through)

So, between those two, Beast Forever ready for edit, and Juggernaught nearing the end, that makes two more books nearly ready for release, and another two right on their heels.  Does that really mean I could get FOUR titles released this!??  I dunno.  But I'm, sure excited to find out!

Of course, there's a big "if" in all this.  Which will explain why I haven't accounted for February yet.  Remember last winter when I got that nasty tonsil infection?   Well this time spent the last month with severe respiratory problem in my left lung.  Every time I plan a DR's appointment, it clears up just enough that I think I'm winning.  "Well, maybe a little longer..." I say.  But then it hangs on... and on... and on...

Like I say, I've lost a whole month over this business, so unless there's a major improvement this weekend, I'm going in.  There.  I said it.  Now I have to go in to the chop-shop.  You're my accountability, okay? ;)

Well, that's a  pretty long update.  I'll close in my usual way and then add a cover idea sketch for the new book.  The elements are all part of the story and I think the imagery is a little interesting / curiosity-provoking.  Let me know what you think over on the socials. 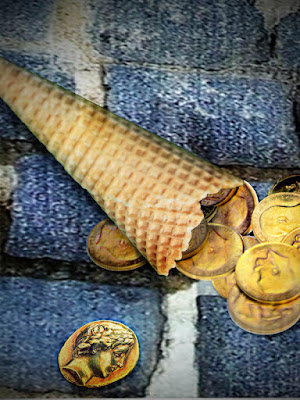