Since this is NaNoWriMo (National Novel Writing Month) I thought I'd do a miniseries on "The Hero's Journey" or, monomyth.

In this post, I'll walk through what that is, and also give you my personal re-construction of it.

Later on I'll talk more about the foundational flaw of current "metamyth" thinking and why I felt the need to completely redo it.  Finally, I'll circle back on what all this means in terms of my catch-phrase, "Live YOUR adventure!"

First off, I'm going to start by doubling down.  Among my issues with monomyth is its poor systemics.  Don't fret too much about this, but as a computer guy I'm coming from an object-oriented design standpoint.  Inter-mingling state diagrams and actors is silliness.  Especially since the whole concept of "The Hero's Journey", already explicitly names the actor ("The Hero").

Therefore, I'm pretty much going to gloss over the cumbersome character types of monomyth, because everybody pretty much has a better understanding of this, just naturally.  "Hero", "villain", "love interest", "comedy sidekick", "henchman", etc, etc.  We know what all those are.  I think the list character archetypes and what role they play is pretty obvious to all.

Just keep those guys in mind and I'm sure we can proceed just fine without wasting time rehashing the obvious.

Anyway, here's the other half of the equation.  The following graphic represents my ultra-condensed version of what makes a story: 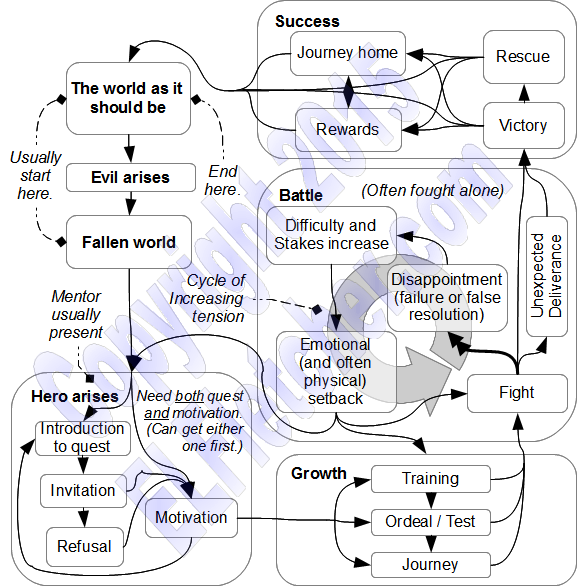 Let's do a walk through of this.

First off, the life is perfect (or, at least "normal").  Then a villain comes in and wrecks things.  We usually either tune in when things are already a mess, or a little earlier to see blow up.

Either way, we need a hero to fix things.  Moreover, it has to be somebody we sympathize with, therefore, usually an everyday joe.

To get started on the journey, he needs two things, the 'what' and the 'why'.
(The order they're obtained doesn't matter):
1) What is going on and what he needs to do to fix it.
2) A reason, or motivation why he needs to do it.
It takes a lot to step out of one's comfort zone, so this has to be a compelling enough reason to do so.

Next, given the idea of an ordinary joe, there has to be some process of obtaining the skills necessary to win through.  It can be training, testing, even being bitten by a radioactive spider.  The point is, they need to grow in some way in order to become strong enough.

Now it's time for the battle!  All that training has paid off, because we're going to swoop in and... SMACKDOWN!  Either we lose, or we find out that this battle didn't solve the problem.  Point is, all our hopes are now dashed.  In fact, what we did made the situation WORSE, and to top it all off, we're further from our goal than when we started.

This dramatic cycle is repeated any number of times, amplifying the tension time and time again with each smack-down.  This culminates in the final battle, which is the most impossible of all.

Finally, against all odds, the hero does win through.
(This can be with the help of a surprise deliver, like Gandalf riding in with the sunrise at the last possible moment.)

Either way, we have victory.  On top of that, sometimes we get other rewards including rescuing the fair damsel and winning her hand, etc.

And the world is made right once more.  The End.

The order of a lot of this is so important to the story that we inherently know when something is wrong or missing.  For instance, in the first Shrek story, he completes the journey, then skips fighting the battle completely, and rescues the princess without even slaying the dragon!  In some ways it makes more logical sense:  sneak around the villain, grab the prize when he's not looking.  Easier and much safer.  And yet... our heroes aren't allowed to do that, are they?  You can't skip the battle.  That's against the rules.

I could go into more detail and cite many more examples of this story flow, but again, you're smart folks so I'd rather challenge you to take the time and think about it for yourself.  How do your favorite books and movies fit in?

Instead, I'd rather spend the time to add one more thing.  Some version of the flow above is nearly always present in stories in the physical sense.  (Knight slays dragon.)  But one of the major things that sets a great story apart from a mediocre one is using this also in a "spiritual journey" sense.

Consider a typical throw-away dime novel storyline:  Santa Fe Sam** rides into town, finds out Bart's Black-Hat gang is pushing the townsfolk around.  He maybe gets beat a couple times, but summons up enough rawhide toughness to save the day.  Ride off into the sunset.  The end.

That's great and all.  Might even be a pretty good story.  But Santa Fe Sam's character is only about three inches deep.  To really make something of this -- to take it to the next level, he needs to have deep internal struggles that he's working through.  Guts-and-grit inner turmoil -  that's how to make people really get in there and identify with him as a "real person".

Well, stay tuned for part II.  Until then,

** I just made this up.  Apologies if this is an actual character.  If so, I didn't have you in mind.  Standard disclaimer: Any resemblance to persons, living or dead, etc...