This is the second part on my series on "The Hero's Journey", or "Monomyth".
In the first installment I covered (my re-interpretation) of that, and how to use it to make an interesting story.

This time I want to discuss the classical model, it's fatal flaw, and why I felt the need to re-invent it.

The problem is, the traditional monomyth relies on a flawed foundational assumption, and like any building based on a bad foundation, this causes cracks to run through the entire structure.  The assumption those who designed monomyth are making is that they are trying to create one overall structure that covers not just stories, but all religions as well.  "Comparative mythology", they call it.

While, granted, some religious figures no doubt arose out of tales told around the campfire, others are clearly documented historical figures who actually lived and whose stories are even corroborated by outside sources.  (Lee Strobel is a good place to start.)

But why call this a 'foundational flaw'?  Also, why re-invent the wheel because of it?
The trouble is, upon making the assumption that all stories and all religions are created equal, they begin to stretch and tear away at an (otherwise, pretty good) model in order to make it fit.  It is equivalent, in both stubbornness and resulting damage, to the proverbial pounding of a square peg into a round hole.

This is why I made my own model.  A lot of it isn't anything new on my part, but merely scraping away the added dross and getting back down to what actually applies to story.

But what about the rest?  What about what's left?  Even if it does nothing for writing, is there still some value in drawing comparison between the life of Christ and The Hero's Journey?

I admit to even taking a wrong turn with this idea, myself.

When I first started down this road, I decided that, yes, Christ is going to be some sort of a base type for all these other stories because  Matthew 24:23-26 says,

Furthermore, in 1 John 2:18 he even states that, "many antichrists have already come"!

Forgeries are made to look like real bills, after all.

But, upon reading more about the Hero's Journey and actually doing the comparison, it turns out I was on the wrong path anyway.  In actual fact, viewing the historical events Jesus' life on Earth through the lens of a conquering hero is totally incorrect.

In fact, it may be even worse than 'incorrect'!

Judas Iscariot, the apostle who betrayed Jesus to his death, was from a Jewish sect called the Zealots.  These people very much believed in the concept of a "hero".  The Messiah they were waiting for was going to be their champion.  He was going to be a mighty warrior and overthrow their oppressor, Rome.

Given this, many theologians speculate that Judas' betrayal of Jesus wasn't just simple greed, but that he also hoped that Jesus' capture would be the spark that would ignite a glorious revolution.

Read this next statement slowly.  Think about it, and let it sink in:
If you are thinking of Jesus as the monomyth hero, then you are following the exact same reasoning as Judas the betrayer!!
(Yeah, that really hit me between the eyes too.)

But the thing is, Jesus didn't overthrow Rome at all!  Never even hinted at it.
Is that so counter-monomyth?  I sure think it is!

Imagine:  Lex Luthor has taken over the city of Metropolis with the power of his nefarious new paralyze-o-beam.  Oh no!  Superman swoops into the scene, and when informed of the peoples' oppression, he says, "Yeah, whatever.  Let's talk about your personal sin problems instead."  Furthermore, "Render unto Lex Luthor, what is Lex Luthor's!" (Mark 12:13-17).

This, by far, wasn't the only thing Jesus did that upset the picture of a prototypical monomyth hero.  Rather more like the exact opposite, in fact.  This is exactly the kind of taken-for-granted thought process that He liked to flip over on its head, time and time again.

Here are some examples of Jesus' most flagrant deviations off-script:

Instead of building a following, Jesus drove away raving fans by saying uncomfortable things like, "unless you drink my blood and eat my flesh...".

Instead of obtaining greatness, He said things like, "the greatest among you is the servant of all".

Instead of being all clean and dashing, He got in trouble for having dinner with prostitutes and national traitors.

Instead of training people to fight back against injustice, He told them to turn the other cheek instead.
(Let the bad guy get away with it!??  Yup.)

Even He, Himself, instead of fighting back (even verbally), He went to his death willingly, "like a lamb to the slaughter"

Instead of telling people to fight the bad guys, He tells us that we are the bad guy!

Instead of calling people to train, try harder, and grow stronger, His message is that we could never be strong enough to win.

Instead of destroying the real villain, He, well, read it for yourself!


"One will hardly die for a righteous man; though perhaps for the good man someone would dare even to die.  But God demonstrates His own love toward us, in that while we were yet sinners, Christ died for us."  Romans 5:7-8

What kind of a hero takes a bullet... for the bad guy!??
But that's exactly what He did.

And finally, instead of sending people off fighting their way up the ladder to earn the ultimate prize, He simply gives it away as a free gift to anyone who asks. (See also: yesterday's Shrek reference.)

Freeze frame those last few ideas.  I want to get back to that next time when I take this thing full-circle and revisit how all this ties back to my motto... 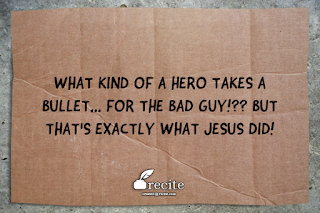