COVID-19 and NaNoWriMo, Both!

Just wanted to check in.  It is November, which, you may know means NaNoWriMo, aka National Novel Writing Month, aka "write an entire book in one month", aka "interrupt me, and YOU DIE month".

Usually I blog on the experience, but this year, as of yet, I have not.  The reason for that is simple:  I decided to go ahead and catch the coronavirus in the start of November.  Yeah, that's right, I'm doing the craziness of NaNo, WHILE sick with the pandemic.  Ain't that nice!

To be honest, I don't even know where or how I caught it.  We hadn't been going out hardly at all.  I'm still trying to scrape together a living from home (programmer for hire, if you happen to know anybody!) meanwhile the kids are all homeschooled.

But yeah, all that and it hit us just the same.

Those of you who have blessedly avoided catching it, may be wondering what having the disease was actually like.  Personally, I didn't think it was *all that* horrible.  Just like a bad flu, really.

Now, back when we caught H1N1, that dude was really bad!  It was less like the flu and more like being whacked with a gunny sack full of bricks.  Oh, and at the time we had a newborn in the house we were trying to keep from getting sick, so... apparently we like to do these things at the worst possible time.

Even though the virus wasn't as much a horror movie as the media might lead you to believe, it does hit the lungs especially hard.  I suppose in that regard I can see how it could be especially dangerous to the elderly and those with breathing problems.  Not that I recommend it in general, you understand.

All in all, I think my NaNoWriMo progress graph also serves as a great graph of how you feel with the virus. 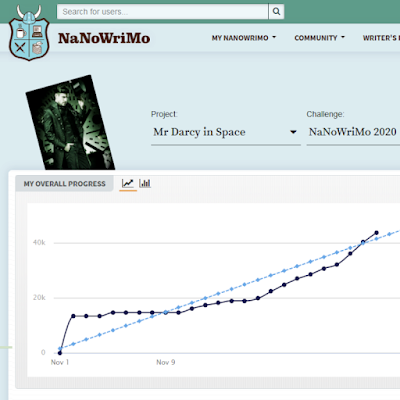 Ignoring the little bump at the start (I slammed out some ideas in Oct to get a feel for whether I would like doing this story or not).

Other than that, notice the complete flatline up until Nov 9.  Then a little boost...  A little virus biting back... then a gradual recovery.  Yep.  That's about what it was like health-wise (as well as writing-wise).

The main thing I can say for those diagnosed with COVID is:  You know how one of the symptoms they list is "lack of taste".  (I'm an engineer, so it's like, "What?  I didn't have any taste to start with!" 😜 ) But seriously, therein lies the virus' trickery.  I quit eating early on because I didn't feel like it.  You can see the results above.  My son (who, btw, was diagnosed with it) kept on stuffing his face, and he was basically back to normal in three days.

Your mama was right!  Keep on that chicken soup!!!

The story title in that image sounds strange what's the deal about that?

So I decided to do Pride and Prejudice... only in space!  Yes, that sounds bizarre, and yes, at times it is.  Though now that I'm 40-something thousand words into it, I can honestly say it actually works!  Not only that, this is turning into a really interesting story!

Now, I didn't want to make it into a spoof like "Pride and Prejudice and Zombies" and I also didn't want to do a straight-up retelling in a different genre like a lot of books and movies do.

I decided to keep all the characters by name, personality, and inter-relationships.  I kept some of my alltime favorite lines as well.  But the story wrapped around these things is all new.  For example, at one point Elizabeth Bennet actually agrees to marry Mr Collins! .... (!!!!!!!!)   Add on top of that some political conspiracy, pirates, razor-toothed alien beasts... and a fair amount of swoonage (got to keep that going #amiright).

All the fun sci-fi drama aside, one of the most surprising things I've encountered so far is in character development.

In the original story and all of its successors that I know about, nobody has ever given Mrs Bennet a character arc!  Surprising, I know, but check me out on this.

Well, I guess that's about it.  In summary:

Mr Darcy in space?  Actually kind of cool!  I'll let you know when it gets published,  I promise!