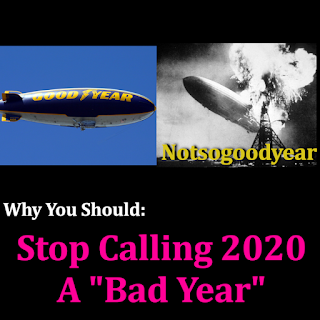 First off, how 'bout that image, eh? 😂
(And, yes, I know about the flammability difference between helium blimp verses a hydrogen zeppelin.  But the pun wouldn't work if they were both zeppelins, so cut me some slack, ok! 😫)

Anyway, I thought I'd jump into a pet peeve of mine today: people referring to 2020 as a "bad year".

Even now I struggle with a similar line of thinking that a day is either a "good day" or a "bad day".  I trace the line of thinking all the way back to the time when I was an Atheist.  It looks like something like this: You get up in the morning and you do this and that... then all of a sudden something happens.  It can be either unusually good or unusually bad, but whichever it is, that initial event is going to characterize the entire rest of the day as either "good" or "bad".

When you think about it, it's  just a manifestation of the concept of "luck", right?  This is your lucky day... as opposed to yesterday, which, wow!  Hope you wore your lucky shoes, because, yikes!

I had to fight this belief BIG TIME when I became a Christian.  (P.S.  You know how sometimes when people repent of something, they decide they have to physically burn the object of their sin in a bonfire?  Well let's just say, "lucky" shoes smell REALLY NASTY when burned!  I don't recommend that particular... form of combustion... to anyone... ever.  'Nuf said.) 😬

Like I say, whether it's a "bad day" or a "bad year"... all the same thing.  I mean, yeah, some of the jokes and memes are funny, but I'm a little sick of 2020 being called a "bad year", but I can understand why people are.  Under the surface I think we try to laugh about it and make light of the situation in an attempt to try and lighten the weight on our hearts of how we feel.

Of course we've faced some difficult challenges this year.  No arguing that.  The alternative is not about being all kumbaya and naïve about things going on.

But still, "bad year"?  Really?  Did we not wake up this morning?  Has the planet Earth's orbit shifted out of the Goldilocks Zone?  Has the Mad Max vehicle army rumbled into town?
(Just kidding.  That last one would be kindof AWESOME!)

No!  Of course not!  The world continues to spin on.  God has not forsaken us yet.

And I think that really begins to touch upon the issue.  As blogger Seth Jones put it, "There are no bad days, only bad gods." just as I found out in my own experience above.

To unpack how this "2020 is a bad year" theme gained so much momentum you have to pause and recognize that Atheism is the dominant western religion.  Our culture at large has no underlying life meaning or divine plan to fall back on, so of course there will be panic.  We're working without a net, here, folks!

Without second-guessing Providence too much, I wonder if the one thing doesn't have a little something to do with the other.  For many people, I hope and pray, this could be the wake-up call where they realize that they have built their house on shifting sands.  The storms of life came down this year (in a downpour), and now they may begin to realize what their foundation was truly made of. (Matthew 7:24-27)

But to you, dear Christian, what's your excuse?  Are you going to take your cue from the sensationalist news media and be swept along with the panic?  Or can you be secure enough in the hands of the Lord to kick back with some popcorn and watch what happens next?  -- Just take life as it comes?

Because the thing is, once you dethrone yourself as the king of your world... when you quit pretending to be the coach, you can finally become an effective player.  Likewise, when your security in life doesn't come from your own doing, but rests securely in the hands of the Omnipotent Almighty Creator, then you can finally relax and focus on being a mere human instead. (Matthew 20:11 promises exactly this!)

Furthermore, continuing with the "bad year", just like the "bad day" observation above, the thought itself can kind of take over and become a kind of self-fulfilling prophecy.  The moment that you've decided in your mind, "this is going to be a bad day", then you quit taking those risks that could bring about big success, while at the same time your full attention is focussed on spotting the negative.  If you set out looking for something to complain about, the trouble is you eventually always find it.

With that in mind, now consider the "bad year" 2020.  It's easy to focus on the negatives.  We all know the list.  It has even become a running gag, "what's next...", like this endless parade of horrors marching by.  But if that's what you decide to focus on, then you're going to miss out on all of the good things.

For example, did you notice that US Marshals made great headway this year, breaking several major child sex trafficking rings and rescuing hundreds of kids from that ghastly life.  You and I might have run out of toilet paper and dubbed 2020 a "bad year", but the child who finds him or herself finally freed from those horrors will always remember 2020 as a year of liberation!  Shouldn't the rest of us celebrate this too?  Or will we be so focused on our own pity-party to even notice?

In conclusion, I guess it's a choice we get to make.  Are we going to sit cowering in the corner and worry?  Or are we going to give it over to the Lord, step outside, and notice that the skies that are still blue and the birds are still singing?