Well it's over - that great month of insanity known as NaNoWriMo.

And if you recall from the previous post I had determined to write a complete first draft of two different novels in the same month.  So how did that work out?

Did I make it?
Did it just about kill me?
Do I kind of regret signing on for that much?

Yes, to all three. 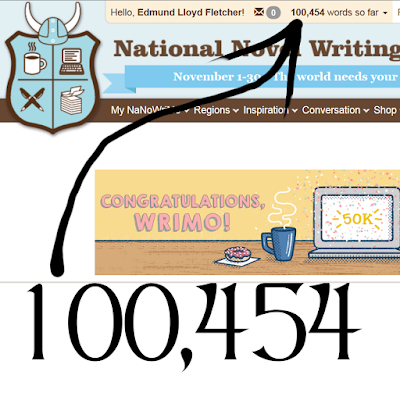 But it's over now, so I thought I'd share with you guys a little postmortem of things and a few gravy quotes of what you can look forward to when the full books are finally released.

Interestingly, the two couldn't have been more opposite.

Yet One Way Ticket:
In other ways they turned out strikingly similar.

In fact, at one point in both stories, the leading female character gets a certain thing into her head and has to be bodily carried away from the situation like a sack of potatoes.  I don't know why I happened to use that exact same plot device twice in a row, but the situation seemed to call for it, so... whatever, I guess.

I've had to shelve stories in the past that simply didn't seem to work out right, but both of these seem like winners in their own way.  Since I literally only finished it moments ago, I have no feedback on One-Way Ticket yet, but concerning Elfworld, I've heard my pre-alpha readers physically laughing out loud, so that's a good compliment! :)

I think you'll probably see both in print someday.

Anyway, here are a couple of great excerpts from each that you can enjoy until then.
(You can totally see the huge difference between the two stories from the tone of the quotes below.)

Nature had done its job well, and the body had no remaining odor to it. All that remained behind were bones and a few stray hairs.

Stricken with a sudden morbid curiosity, she reached over plucked one up.

Drawing it out, she watched in mute fascination as it slid through her thumb and forefinger.

Who were you, once? she mentally asked the bones. You had pretty hair. she added, realizing that the color and length was not dissimilar to her own.

How does it come to this? You were just an average woman living in Utopia. she thought, not sure which one of them she was addressing. But The Collectives had their points to make, didn't they? And so, here you are.

Were you going to the fridge for a snack when it happened? she wondered. Were you making a meal for your family? Are they buried here too?

Or did your body simply fall here? Thrown out with the rest like any common piece of garbage?

The bones would not answer.

His friends had long ago given up any idea of participating in the fighting and now merely stood aside and watched. Though he plowed through the soldiers as reckless as lemming on crack, and though he had too many holes in him to count, Benny's life bar hadn't budged a single tick.

If the previous battles were any indication, he should be feeling tremendous physical pain right now, but apparently the effects of Trina's last Courage +50 were eclipsing even that.

Kamauski cleared his throat. "Um, guys. You know we're probably the worst fantasy team of all time, right? I mean, the only reason we're even winning right now is because we slipped our own leader a power-up mickey so he'd do all the fighting for us..."

From her present point of view the city seemed to be a rare oasis of life in this world of war and decay, but now Emily had seen the truth behind the illusion, however. It was no oasis at all, but a great and hungry leech, sucking away the life and all good things from the surrounding land. This even included its own underground, for not but a level or two below the surface, the destitute people of the Fells treadled the great millstone that made the whole engine turn. Utopia, built upon hollow stuffs, in more ways than one.

On the TV screen, a drone shot panned across a roaring stadium of mixed-species fans of all walks of life.

Cut to a balding announcer in a crooked tie. "We're back! Bottom of the sixth, Cubs are still up by two. It's been an exciting game sportsfans."

Same announcer, in voice-over as they cut to the diamond. "But they may be in trouble, folks, coach has sent in Kellan Frostbeard."

A white-bearded dwarf spit (not to be racist, but dwarves tended to like that part of the sport), tapped the dirt off his cleats, and settled into his stance.

"Now, Frostbeard led the league in RBI's last season, despite having a fairly low number of hits."

Another voice, "Right you are, Chuck, but I'd like to remind you that when looking at the stats of your halfling batters it all comes down to a question of whether the pitcher can put it across the strike zone or not. And with the bases loaded like they are, it looks like the Cubbies could be in for --"

Untold thousands of fans around the nation groaned in unison as the picture cut out in favor of the station logo.


Well, that's it for now.  I guess I have to come out of hibernation now and see what real life has to offer. ;)