Adventure vs Boredom / Trouble vs Security

As promised previously, time for more waxing philosophical on the, "Live YOUR adventure", motto.

Last time I hit on it a little bit, but the strange irony is this:  People naturally yearn for adventure, but try to distance themselves from all risk.  (Me too!)

We hate boredom, but strive for security and to prevent anything unexpected from ever happening.  Mortgage ourselves up a nice white picket fence in suburbia... and then wonder why life is so dull.

I know this by experience.  I have literally owned a house in suburbia with a literal white picket fence.  My worst worry in the world in those days was keeping the lawn manicured to the exacting specification of the self-appointed neighborhood SS.

(I could go on how living under such artificial monotony tends to make people take objectively trivial things far too seriously,  thus turning them into turn into raving draconian sociopaths over nothing.  But that's another rant.)

(Plus I wouldn't want to start sounding passive-aggressive or anything. ;) )

Anyway, point is, before I was worrying about mowing twice a week and eliminating any patch of yellow, and now I'm wondering how many days of food I have left before some cash starts coming in.

Reminds me of my kids' pediatrician.  His motto is, "I'd sooner patch up the odd broken bone now and then, rather than see the kid inside watching TV all day."
But what about adults?  Would I really risk failure to have a chance at success?  Or just play it safe, stay home, and eat some plain, safe, malt-o-meal?

There are several well-known and inspirational quotes about this, but why bother?  We've all heard them a thousand times already.  Agreeing with the concept is one thing, acting on it, far more.

But is it scary out on the edge?  You guys are hoping I'll say, "No.  Cinch, baby!  Success is guaranteed!"
But I'm a bad motivational coach.  Sure it's scary.
And exhilarating!

Adventure, fear, trouble, risk, excitement... all come in the same package.
Security, safety, "normal", boring, pointlessness.... that's the other choice.
You can't have it both ways in a matter.

So which to choose then?

In a universe of random chance, it only makes sense that a person would choose #2.  Do nothing that could get you eaten.  That's the game plan.

In a Christian universe, however;  A universe under the control a sovereign, powerful, and loving God?  Get out there, for crying out loud!
What?  Do you honestly think that you were created for some meaningless rat race, simply killing time?  Or were you made to be a champion; as God's own emissary designed to score a point or two for the good guys in this overwhelmingly evil and hurting world?

Big questions for me to leave on your doorstep and drive off, I know.
If I could offer one last suggestion though... 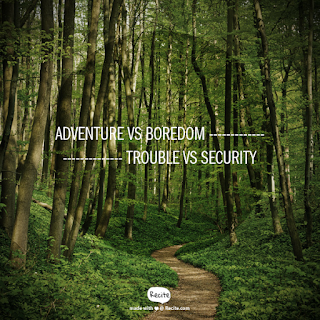