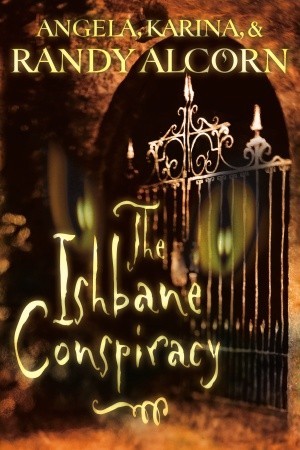 Sneak a peek over the enemy's shoulder as Lord Foulgrin describes his plan to capture the souls of four young friends. Picture-perfect Jillian is terrified of getting hurt. Tough-talking Brittany trusts nobody. Successful athlete Ian dabbles in the occult. And former gang member Rob struggles with old guilt and new faith. Will they resist temptation?

Any instagrammies (insta... grannies?  What??) reading this will recall I recently made out like a bandit at a library book sale.

Well, one of the things I came away with was The Ishbane Comspiracy by Randy Alcorn.  (Third book down in the far left stack.) When it happened, I was a little short of time, so I saw "Randy Alcorn", grabbed it, and kept right on swimming through the book table like Scrooge MacDuck.

It, in fact, is not only written by Randy Alcorn, but also his two daughters Angela and Karina.  Truth be told, it was probably written entirely by them, only leveraging their father's name to get ahead...  which I don't begrudge them.  It's is nice work if you can get it, right? ;)

Anyway, I didn't realize until I finished it, that this is technically a sequel to another book called Lord Foulgrin's Letters.  You can very well read Ishbane all on its own as I did (it stands alone fairly well), but I believe reading the other first would give some helpful backstory on the Foulgrin vs. Ishbane conflict as well as what happened with Mr Jordan Fletcher, the father.

On to the review:


I honestly didn't know what to expect going into this.  It seemed more like a This Present Darkness straight-up spiritual warfare story, but turned out to be more like The Screwtape Letters.

[Aside:  For those who don't know C.S. Lewis' The Screwtape Letters is about a demon writing to his nephew/apprentice about the best ways to beat you up and kill you.]

The first book even brands itself as "a screwtape letters for our day", which, yes and no.  I have to say that a lot of the "our day" stuff was a little dated, even for the 2001 printing date.  But hey, if you write it off as the world the book is set in, you can move right along, no problem.

As to the screwtape letters angle, I liked that they intermingled a narrative story with the letters between the two demons.  Unfortunately, they chose to always include one letter per chapter.  The chapters themselves were short and sweet (if you've read my stuff, you know I like that model).  But mix the two things together, however, and you have a lot of demon banter that is simply there for filler.  As the book progresses you come to dread getting to the end of the action because you know that you'll have to wade through two pages of Hell's politics before getting on with the story!

And to make matters worse, demons, as it turns out, always seem to speak in mixed-metaphors.  Why?  Well that brings me to...

The biggest problem, however, can be seen before you even get to chapter 1.  Just take a look at the acknowledgments page.  Usually, it's a one liner, like, "I want to thank God and Uncle Jessie for always standing by me." ;)  This book lists over a full page of people who all threw in their ten cents!

So what does that mean in a practical sense?  It means that they tried to cram in every possible thought about Christianity as it relates to the modern world.  I mean, to their credit, they get it all right.  Flat out nailing that many culture/worldview issues is no small fete!  But the thing is, doing it all in one book... that's a bit much.

No.  Strike that.  A Kendrick Brothers film covers a bit much.  This is like four Kendrick films smooshed together.

And this is just a sampling off the top of my head!

All those things are great topics that need to be discussed.  But pick ONE!  (Maybe two or three at most.)

Of course, this is the reason behind all of the mixed-metaphors that I was complaining about earlier.  It's this continual shifting from one great analogy to another without a clutch that's really grinding my gears. (Now how's that for a metaphor!  No?  Okay, moving on...)

Finally by the time we reach the major climax of the book (I won't spoil it) we have one -- count 'em, ONE -- chapter for the characters to come to grips with what happened.  You know how in my review of Haunted House Flipper I applauded the author for having such a clean, tight ending.  Well, that's doubly to his credit if even the Alcorns have a hard time getting it together.

At this point I want to pause my ranting and call a time-out.   In these reviews I'm always worried that people will read all of my negative comments and go, "Wow, thanks, I sure don't want to read that one, then!"

I mean, some of them are that way, but if that's the take-home, I'll definitely say so.

I would recommend reading the first book if you can.  If not, don't sweat it too much.  Go ahead and grab this one anyway.  It stands well enough on its own.

As far as the book itself:  It's good, but it does cover a lot of ground.  I think if you know that going into it, and you're ready and willing to take that journey, no problem.

If, on the other hand, you're not feeling up for that and want something with a clear, straightforward theme...  Well, I wouldn't say don't read it.  I'd rather say, keep it on your shelf until the day you are in the mood to chew through it.

Interestingly, one of the metaphors in chapter 3:


"No I mean it.  I'm not in control.  Neither are you.  We can do what we can do, but let's face it, we don't pull the strings of the universe.  It's like we're on a big ship crossing the ocean and we can do certain things on board, like eat lunch or play shuffleboard or take a nap or read a book.  But we can't make the ship go wherever we want."

I noticed must have come directly from the A.W. Tozer book I recently reviewed! Concerning the sovreignty of God, Tozer says:


On board the [ocean] liner are several scores of passengers.  These are not in chains, neither are their activities determined for them by decree.  They are completely free to move about as they will.  They eat, sleep, play, lounge about on deck, read, talk, altogether as they please; but all the while the great liner is carrying them steadily onward to a predetermined port.

How's that for good timing?