Writer's Power-Tip: How to get away with anything you want! 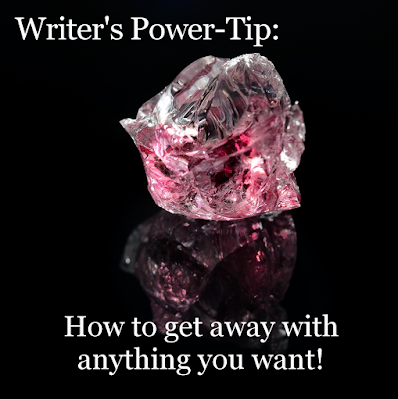 Okay, so I thought I'd check in here and give my fellow writers one of the most valuable and revolutionary discoveries I've found while learning the craft of fiction writing.

Suppose, say, you are fact-checking your novel and realize, "wait a minute, that can't happen because    X   !"  Whatever X is.

Now, if X happens to be a continuity problem within the story itself, then the real and preferred solution is to go back and rewrite such that everything fits together nicely.  (There is another option which I'll get to later.)

But what if X has to do with a physical real-world fact which you have no control over?  Then what do you do?  Again, you could go back and change the story to fit, and in many cases, should.  But another, and far more interesting option I've found is to instead incorporate the dilemma itself into your story world.

For example, in the book I'm working on, my MacGuffin contains a specific type of gemstone.  (Hence the article image above.)  The only problem is: this mineral is not found in the region that the item is supposed to originate from!  Oops!

Well, I could have done the obvious thing at this point and gone back and changed the type of gemstone (to something nowhere near as cool)  or even changed the setting to somewhere the gem is found.  What I did instead is, as aforementioned, incorporate that "mistake" into my worldbuilding.

There could be a lot of different ways to do that.  One way I could have used is to make the item's real origin (the place where the mineral is found) into a mystery that the characters must uncover along the way.

What I chose in this instance was to make a secret deposit of the valuable mineral in the area.  Not only did this explain away the issue, but it also added an entirely new dimension to the plot, in effect, upping the ante!  Now, not only would victory mean the characters' survival (always an option I hope to pursue in my personal life as well) but also, the reward of untold riches!

"Oh, come on," you protest,  "an amazing undiscovered mineral suddenly popping up in the middle of noplace.  Are people really going to buy that tall tale?"

I suspect so, considering the $202 million bucks that Black Panther brought in on opening weekend.  (You know, that one story about an undiscovered mineral, vibranium, suddenly popping up in the middle of noplace...)

The thing is, writing is not a linear deal.  You can go back any time and re-craft your world in any way that you need to such that the story works out the way you want it.

Finally, before I go, I promised to give another option besides revising to plug continuity problems in a story.

In another example, in the Queen of Atlantis, I wrote myself into a pickle where the team is assembling the gear for their adventure and Michael takes away Jane's camera demanding that it be left behind.  The idea seemed straightforward, but upon writing it down... here he's ready to hop in the van and leave... but now he's got this thing in his hands.  Awkward!

"So, hold on everybody.  Stand there and chew some bubblegum, talk amongst yourselves, while I run this inside."  -- Well that sure doesn't work, does it?

Ah, I have it.  He turns around and hands it to his butler to take care of.  Problem: solved!  ... or is it?  But who is this guy?  Where did he come from?  Now I need to introduce him somewhere else in the story (which is already lagging) and then make sure he's there that morning... give him something to do... ugh!  And all that for very, very little payoff just to have an "extra" standing there at the right moment.

So how did I solve it?  I completely wrote it off!


She reluctantly unslung the padded camera bag and handed it over to him.

Michael, in turn, handed it to a servant who Jane hadn't noticed a moment earlier.  "I'll hang onto it for you.  You can come back here and get it when you return."

In two sentences an unnamed servant materializes out of thin air, performs his one reason for existing, and is gone.  Yup.  A total cheat.  But it works and (unless you read this beforehand) you'd probably never even notice the phantom butler.

I think the lesson I'm learning through all of this is that, so long as you explain it to the reader, whether it's a full-blown plot device as in the first example, or even the almost scandalous, "oh, I never noticed that guy standing there" from the second,  you can basically get away with anything you want!

This is very good news for us authors, and, I hope, another valuable tool that you can keep in your bag of tricks.