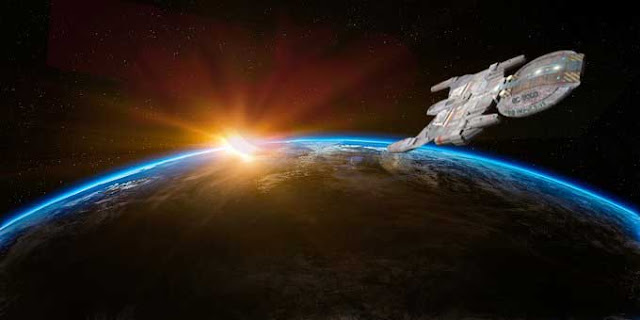 If you've been enjoying the Juggernaught weekly serial, here is another online book you might want to try.  I've been following it for many weeks now, and have literally laughed out loud with each installment.  Since I liked it so much, I decided to post my review for no other reason than to spread the word.

The story is "Space Traipse : Hold My Beer" by Karina Fabian.


INTRO:
"Space: It’s huge! You think Texas has big skies? Ain’t nothing compared to the view out the viewscreens. And it’s just full of wild places and interesting peoples. These are the adventures of the HMB Impulsive. Its mission: to explore those new and interesting worlds (wilder the better!), to seek out new peoples and to boldly do what no one else has the guts to do! Don’t believe me? Hold my beer!"


Like you may be able to deduce from the title and the intro, it is a science fiction Star Trek parody.  (Space=Star, Traipse=Trek, get it?)  Yet while the parody aspect is certainly there, the world and the characters stand on their own.  That, as opposed to those parodies where practically every word has to be a mirror of the target world.

And in case you hadn't also gathered by the sub-title "hold my beet", content-wise it isn't exactly squeaky clean.  I mean, nothing awful, but probably not good to share with your 3rd grade Sunday School class if you know what I mean.

What I like most is the author's style.  Between her reckless anything-can-happen universe, and writing style replete with literary gags, I'd say the story seems like something Douglas Adams might have written.

For instance, in the latest installment, there is an explosion and one of the extras gets to take over for the injured crewman.  While everybody else is busy worrying about the battle going on, he's all smiling texting his mom about his new promotion.  "If it was his last [day] alive, he wanted her to know he died relevant."

Anyway, if you like online serieses and don't mind a bit of redneck-ish humor, I heartily recommend giving Space Traipse a try!