Why do we Crave Adventure?

Bungee jumping, motocross, skydiving, and all kinds of hurling yourself through the air at ridiculous speeds -- we're a culture obsessed with eXtreme sports.

I've got to be honest with you guys, I even ride a roller coaster and my senses are going,  "Hello? We are falling, here. This is a BAD thing.", so I have no problem shaking my head at the eXtreme sports crowd. That is to say, I admit I have a certain bias, so, fair's fair.

But seriously though, do you ever stop to think about how insane that is? "Why would you jump out of a perfectly good airplane?" goes the old saying.  The brain understands this as reasonable, but the heart wants otherwise.

But the big question I want to think through with you guys is, "Why?"

I somehow got on to listening to an old Paul Harvey soliloquy on youtube the other day:
Video @ 9:16
What's interesting to me is how he talks about the pioneers and settlers that made America into what it is today. Those old timers did a very dangerous thing, and didn't look for, or even expect, a safety-net.  They're like, "Trackless wilderness?  Wild animals?  No idea where my next meal's coming from?  Bring it on!"

Aside, one of the guys in my mens' group said something to this effect:  "Maybe the reason America is what it is, is because it was historically a frontier country, and therefore attracted just those sorts of people."  Maybe we're a nation of reckless adventurers by definition? (I'll just leave you with that thought.)

An even weirder thing about our modern culture is this: We are not only obsessed with thrill-seeking, but now equally obsessed about insulating ourselves from all forms of pain -- or even inconvenience.  So we have this strange paradox, right?  We desire both safety and danger both at the same time.  Think about it. (You might also want to read my article Adventure vs Boredom / Trouble vs Security )

"But why?"  I ask again.  I mean, the safety side is at least logical, but why desire adventure at all?  The "perfectly good airplane" analogy above is what makes sense.

In another sense, what might He be trying to communicate through the general revelation of His creation?

Rich Mullins once sang about, "The reckless, raging fury that they call the love of God" and I think that may be a clue.  It comes down to God's desire for our lives.  As Christians, we're not saved and then left on the Earth to lead a cushy life.  That doesn't make any sense because the Earth is cursed and crying out in anguish.  Heaven is the place for things to be painless.  No, our purpose here can't be to sit in a recliner, but to make a difference.  To take care of the poor and oppressed - yes of course, but even more important, to spread the message salvation and deliverance to our fellow beggars!

Think about this, the so-named "great commission", tells us to "Go into all the world, ..." (Mark 16:15)  If that doesn't sound like a clear call to adventure, I don't know what is.  Furthermore, if you think that living this life sounds easy or safe, I'd like to direct you attention to the book of Acts, Jesus sending us out as "sheep among the wolves" (Matthew 10:16), or even the Voice of the Martyrs website if you still don't believe me.

Of course, it doesn't have to be the whole world in one chomp.  Venturing outside the front door and getting involved in our neighbor's life might be a comparatively adrenaline-packed move for some of us.

Whatever form it takes though, we DO have a purpose and we DO have a job.  It's a big job.  It's a risky job.  It's certainly an adventurous one...  IF we make the move to step outside of our artificial cocoon of comfort and take up the challenge before us.

What if:  Instead of bungee jumping (which has no point), God intends for us to spend our innate desire for adventure on something that actually counts.

What if:  The world is looking to us for hope and light (Matthew 5:14), and maybe we should step up to that roll.

What if:  If the Christian life seems boring... we may be doing it wrong!


Can I say it?
Can I remind us all again? 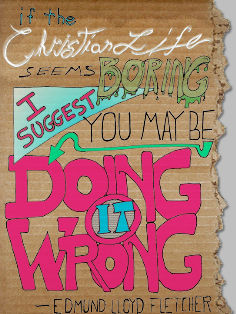