With a title like that, you may have guessed that it is time for another movie review.
(That, or the Borg have assimilated Charles Dickens.)
(Now that I mention it, that might actually be cool.)

And, since I'm a broke, you might have also guessed it's time for a movie review on things that have been out so long that it probably doesn't matter anyway.  Well, keep reading.  There might be some surprises in the end.

Let's start with the "worst of robots".  Star Wars.  And, you know I'm not talking about The Force Awakens yet.  Who's got that kind of bankroll? ;)

No, I hesitate to say this for fear of having my geek card revoked, but I just barely did the prequels.

First, a word in my defense:
I want you to know I was born the same year Star Wars came out in theaters.  I camped out for Episode I.  I even had the Boba Fett action figure as a kid that I played with regularly -- even after the dog chewed off his leg and I replaced his foot with a yellow wire nut.  So don't tell me I'm not a fanboy, okay!

All that to say, by the time Episode II came out I'd had about enough of JarJar to last me so I skipped it.  Also, Spider-Man came out at the same time, which appealed to me more.  (A lot of people must have felt the same, for it really gave the Marvel movie empire a good shove over the top, which I think is still rolling with Avengers, etc, so no bad thing.)

Anyway, I admit the prequels weren't as bad as I was expecting, but here goes:

Episode II - really had no plot of its own.  It was basically the backstory to Episode III.  Just aimless wandering through space from scene to scene.  "Oh, look at that.  Dark Side must be planning something.  Oh well.  On to the next planet."  At least CG Yoda's fighting wasn't as cheezy as I was afraid of it being.  He was okay, but Anakin was an impetuous jerk and Obi Wan was a crusty jerk and I didn't really like either of them.  I ask you: How can a story succeed if you don't care about the protagonist(s)?

Episode III - was better.  At least it had some story.  Even so, it sure seemed like more like it was trying to say "THIS is the reason for THAT in the original" and then maybe some plot if we have time.  Anakin and Obi Wan hadn't improved.  Also, when Palpatene got zapped by Mace Windu his acting got so melodramatic and corny I had a hard time not turning it off.  (Is this really the same franchise that brought together Fischer, Ford, and Hamill?  I ask you!)

(EDIT:  Palpatene's acting, that is.  Not Mace.  Mace was the the best actor in the whole of the prequels!  Sam L. seriously carried the full weight of all three movies himself when it came to that.)


I remember last year how George Lucas did an interview on the wild success of The Force Awakens, playing the 'arteest', and alleging that Disney stripped the franchise of its artistic merit.  (I just want to hear him say that in a JarJar voice.  All I ask.)  I'd respond to that, in the words of his own movie:

You turned her against me!

No.  You did that yourself.


Okay, so that's that.  The other movie I rented just in case was called Pacific Rim.  I frankly hadn't even heard of it before I walked in to grab Star Wars.

I must say, it's one of those movies where they jam so much action in before the opening credits even roll that you have to sit up and take interest.   In fact, I hate to say it, but at least as much story happens before the title screen in Pacific Rim then happens in all 3 Star Wars prequels!

Basic idea:  There's a space portal in the bottom of the Pacific (hence the title) where all these gigantic monsters called Kaiju start coming in to eradicate humanity.  Humans make gigantic robots called Jaegers (not to be confused with Chuck Yeager)  (though he might be good too) to fight these alien monsters.

It looks like Earth is winning until people realize that the aliens are getting stronger a lot faster than the mechs and that in the end humanity must lose!  This gives the film a cool dystopian flair with crushed and crumbling cities, etc.  'The last of the last, going down with guns blazing',  that sort of thing.

The acting is great and the characters have a lot of personality and endearment.  And even though giant robots vs monsters duking it out in major oriental cities has a strong  "Godzilla vs Mecha-Godzilla" leaning, it never comes across as a B movie.


1) Star Wars prequels?  Meh.  This, you've probably already decided for yourself, so no real news there.

2) Pacific Rim, on the other hand, is a great and action-packed bit of sci-fi that you may not have heard of.  Check it out sometime!

3) Putting it all together, they need a story where Chuck Yeager has to battle a cyborg Charles Dickens.
...Just think about it, okay? 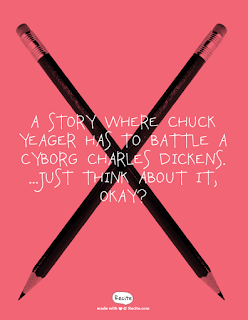