It is something that I found in all those old papers I've been going through and getting out of the office, as I mentioned the other day.  Pretty old stuff I wrote straight out of college, but I thought it might be worth talking through to give you guys something to think about.

But before I get ahead of myself, let's chat about the basics a moment.

Suppose we have a big goal.  I'm going to go with "weight loss" since it's the first of the year, and that is always a popular one.

Two things we need to do to reach that goal are:
1) To have a specific result in mind.
2) To break that goal down into smaller, actionable steps.

First, we might say "40 pounds in a month" is the result we want to move toward.  Then break that down to action items: x diet and y exercise every day to get us there.

This should all be pretty obvious.

But what about a huge goal, like a major construction project?  Saying "I want to remodel the entire house" is a bit much to chew.  That's why my old notes mentioned something I called "goal paring"

Most people already knew the earlier stuff, and I'd guess this next bit is not completely unheard of.

The idea is, like if you were designing a car, there upwards of a hundred thousand parts involved.  Not even Rain Man could keep that many things straight in his brain all at once.

So how do they do it, then?  Sub-assemblies / sub-systems, that's how.  This is the engine here, the body there, and the electrical system over there.  Then they can even chop it down further, this is not only the engine, but here is the fuel delivery system, there is the ignition system, etc.

Goal paring, to recap:  Starting with a huge problem, you chop it into smaller and smaller chunks until you arrive at "What can I do today / right now?" 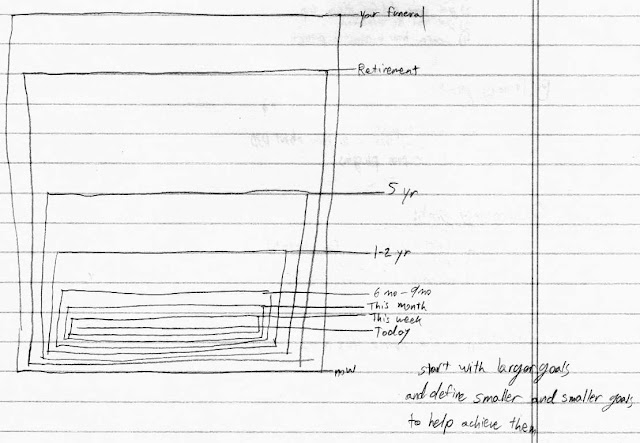 (Eat your heart out, Picasso!)

If you looked closely, rather than scrolling past, you might have noticed something else I did there.  Where this all gets interesting (and this is the purpose of this blog post) is what happens when you go the other direction!

So I designed a car -- the very latest thing in Hupmobiles.  Now what?  How does that fit into my overall career?  My family?  My life?

Doing that could potentially prevent that tragic quote:  "I spent my life climbing the ladder -- only to find it was leaning against the wrong building."  -- A situation both sad and common.

Like, we're on a path, but we never look up and see where we're ultimately going.  Why is that?
Reminds me of when Ebenezer Scrooge says, "Ghost of the Future! I fear you most of all!"

The very outer box of my sketch says it two words.  "Your funeral."  That's where we're going, right?  Ultimately, we take one last ride in a tiny little box.  People cry, throw some dirt on our face, and then leave us there and go on without us.

Really, though, I think we need even that uncomfortable reality to make the rest of the plan make sense.  We're only one tiny part of this big, big universe.  How do we spend our time wisely, to do the most we possibly can for the short time we're in it?

If you let it, that kind of thing can change your life.

Maybe spend less time designing ignition systems for Hupmobiles, and more time making friends and helping people.  Or, dare I say it, quit a lucrative job programming embedded systems, forget about amassing a fat 401K, and try to write things that will change the course peoples' lives, instead.

But, I have one more plot twist up my sleeve.

You could take what I've said so far and run with it.  You could re-arrange your life and make the world better, (and thanks for it) but ultimately your story ends the same way.


"What will it profit a man if he gains the whole world and forfeits his soul? Or what will a man give in exchange for his soul?" (Matthew 16:26)

Jesus also equated eternal life with the story of a guy who heard about a "pearl of great price".  He went off and sold everything he owned to buy it.   I compare that to something like, "TV mogul Ted Turner makes you an offer.  'I'll trade you everything you own, for everything I own.' "  Would you do it?  I would!  Though giving up my home and all my stuff might be uncomfortable, there's no doubt it would be a good deal.

That's the sort of context for that question in red.  I admit I was holding out a little on you for emphasis, because immediately right before that:


Then Jesus said to His disciples, "If anyone wishes to come after Me, he must deny himself, and take up his cross and follow Me.  For whoever wishes to save his life will lose it; but whoever loses his life for My sake will find it." (Matthew 24-25)

This is the ultimate outer box when it comes to planning our lives.  You could take what I said before and become a "nice person"... and then die regardless.  Or, you could make following Christ your focus, and live forever.  Even if it cost you everything, the second option would be a bargain in comparison!  (Literally, the deal of a lifetime!)

So, guys, I'd like to challenge you (and me) this new year to take a step back and take a look at the big picture.  Get that vision of where we're ultimately headed, and to re-assess whether the things we're consuming our precious hours on are really getting us where we want to be.