This is the third part in my series concerning "monomyth", or "The Hero's Journey".
If you don't know what that is or if you want to apply it to writing, see Part I.
In Part II, I took a look at the motivation of the designer(s) of monomyth and asked the question, "Is Jesus a storybook hero?"  (Surprising answer:  No!  In fact, He messes up the whole thing!)


But now, finally, we get to the part where I tie "The Hero's Journey" back to my most favoritest phrase, "Live YOUR adventure!"

First, in review, here's my handy refined version of "The Hero's Journey" for reference: 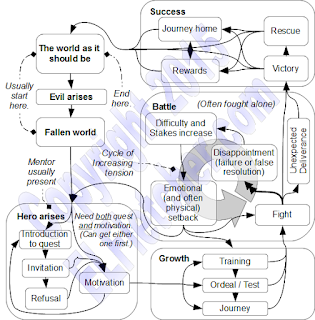 I suppose the first thing to notice is the universal concept of "a perfect world".
Yet, equally universally, the world as it is doesn't jive with that, does it?  There's a discrepancy there, which cannot be denied.  If for some reason you don't believe that, just pick up a newspaper.

Even though the notion of a fallen world is so easy to see, many worldviews really don't make sense with it.  For instance, isn't it strange how even those people who maintain that this world is all there is, still get upset with all the evil, pain, and death going on?

For a third time I bring up the word "universal"... because it's true!  Even without ever reading Genesis chapter 3, we know that the world is fallen, just naturally.

The next phase of the game is where a hero arises.  Though seeing that there is a problem with things may be so obvious to all, the call and ability to do something about it is not.

Most would look at a given problem and say, "It's not my problem to fix."  but the tricky part is those who do try and "fix" it (note my use of quotes), without really having any idea what "fixed" even is!

I call this the Babel effect.  (In fact, I talk about it in the book.)  The pattern is that just like the Tower of Babel, when man tries to achieve Utopia on his own, disaster, death, murder, invariably follow.  It seems counter-intuitive, but historically, fact!

The problem is you can't get back to Eden apart from God, and when you try...  the curse is that He lets you go ahead and see exactly what your efforts get you.

You can "change" the world all right on your own, but how can you change it for the good, if you don't even know what "good" is?   No, to rise up a true hero, you first need to know the battle you're fighting.  You need to be on God's side, and understand His righteous standard as set forth in His Holy Word, the Bible!  Only then do you have a clear definition of "good".

(Anything less than that, is situational ethics, at best.  Hence the Babel effect.)

If all you want to be is a warrior, please spare us all and stop now.  The world needs a righteous warrior, or none at all!

The next step on the journey is training and there's another surprising thing about this step as well.   The problem is not so much that people skip this step, but rather they begin to see the magnitude of the struggles coming up in the next stage, and they say "I can't handle that!  I need to prepare more."

Maybe, but in a lot of ways this is an excuse to not have to step out and face the unknown.  The amount of training is usually quite minimal, and a lot of what a person needs to be "ready", is on-the-job training that can only be taught by the experience itself.

I mean, how many books on hang-gliding do you need to read to make you "ready"?  It doesn't make sense.  Find somebody who knows what he's doing and go jump off a cliff together.

Then the fight.  Oh how we long for it -- and fear it.  (I talked earlier about the dichotomy of longing for adventure, yet craving security.)  Not much to say here, but the struggle is hard, and it does leave scars.  Yet even the worst fatal outcome is better than living under a "what if" the rest of your life.

Also, time to point out that the cliche "failure is not an option" -- is DEAD WRONG!!!  Notice in the journey diagram that setbacks - even multiple and severe ones - are an expected part of the process.

Of course, this all feeds back into the "learning" on-the-job thing as well -- like the famous quote from Thomas Edison, "I have not failed. I've just found 10,000 ways that won't work."

Finally, the reward/victory.  There is a problem here as well.  Some people let any praise and recognition go to their head.  Me, I'm the opposite.  I don't know how to handle praise.

"That was so awesome!", says somebody.
"Um... Thanks?  I guess...", says I, awkwardly, thinking self-doubting things like, "Did they really like it, or are they just trying to be nice?"

But even if you can digest it better than me, there is also the very real possibility of allowing the amount of praise you do (or don't) get to define your worth as a person.  Once again, the only real way out of that pitfall is a correct understanding of our place and status in the universe (ala Scripture).  Achievement, or even failure, does not alter our eternal reward, nor our status as adopted children of God... up to, and including being considered royal heirs in His kingdom!

Could you get a big head about this?  Perhaps, but for the fact that He did it all and He gave it to us as a free gift.  Not only that, but go back to the beginning.  He has called you, He has sent you on the quest, He has equipped you for the task, and and He walked with you through it!

Here's an interesting memory verse for you:

God was the one, from beginning to end!  Therefore, when we cross that finish line, we need to remember to give credit where credit is due.

Finally, that brings us back to, "the world as it should be".  This is the most straightforward part of life's journey to answer.  In the Bible, there are four chapters of a perfect world:  The first two, and the last two.  We are living somewhere in between, and that's just the reality of the situation.  The restoration of the world to utopia is nothing that man can achieve.  Rather, it is something that we hope for, watch for, wait for, and look forward to personally experiencing one day.

And that, my friends is the grand adventure we are a part of!

So, where are you?  Have you just begun to follow God and discern good and evil?  (That's great!)  Are you looking for a need and watching for a quest?  Are you bogged down in preparation, thinking you're not up to the task?  Are you in the midst of the battle?  (That's where I am.)  Have you suffered a major setback?  Or are you struggling with giving God the glory and reward that the victory provides?

No matter what stage you are at, let me admonish you once more, as we take that hero's journey together...


As I take another trip through this chart, I really have to say I'm not the first person to do so.  Take a look at all the Christian allegories:

The Dream Giver by Bruce Wilkenson (More on that in a later article.)
C.S. Lewis', Narnia
Chuck Black's Knight books (Like in the mini review I did last week)
The Giant Killer, by A.L.O.E.
and most famous of all...
Pilgrim's Progress, by John Bunyan [link to free download]

They are all doing essentially the same thing:  Namely, drawing a parallel between the classical story flow, like in the image above, and how it mirrors reality.  I'm doing nothing different here, besides being more explicit and less entertaining about it.